From the Jim Brodie mystery-thriller series

A number of people have asked about the kinds of antiques Jim Brodie carries in his San Francisco store, so what follows is a small sampling of what he offers. Many of the objects are mentioned in the books.

Please feel free to "window shop." Note that this is a virtual representation of a fictional antiques shop, so only in the novels does Brodie hunt down art and quote prices. (He's had a handful of real-world inquiries.) I'll leave the last word to Brodie himself:

Most of the stock is affordable and speaks of far-off lands and long-lost times in a way few items can. In a way that brings richness to my life and, ideally, to my clients'.
—from JAPANTOWN 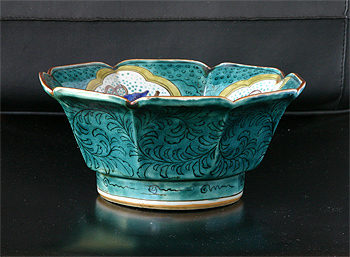 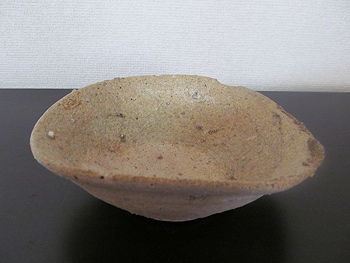 Mountain tea bowl (yama-jawan). Ceramic ware, Tokoname kilns, Japan. Ca. 12th-13th century. 2 x 6 x 5 inches (6 x 16 x 14.5 cm). These ancient tea bowls were fired in stacks in wood kilns. Natural ash landed on the pieces and melted in the higher temperatures into a glaze that fused with the clay. The unglazed circle in the center is where the upper bowl was positioned. Natural, simple, unpretentious. 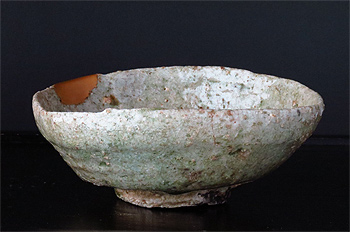 Iga tea bowl, with "half moon" gold repair. Shiro Tsujimura (b. 1947--). 1980s. H: 2 inches (6 cm) x D: 5 inches (14.5 cm). Tsujimura is a master artist-potter living in the hills of Nara, Japan, known for his tea bowls, vases, and other ceramic forms. This bowl, one of the artist's early favorites, has a repair, a common practice in Japan that can give a piece additional character. 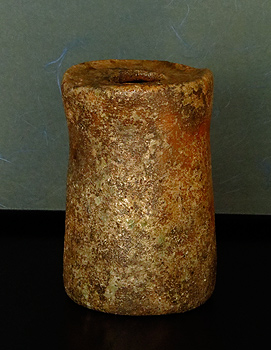 Flower vase in the shape of a "travel pillow" (tabimakura). Misa Naoki (b. 1947- ). 1990s. H: 6 inches (16 cm) x D: 4 inches (10.5 cm).
A popular traditional shape, this vessel exhibits all the characteristics Japanese cherish in such a piece; it is quiet, unassuming, and natural. Misa fires in a small kiln at her home in Kamakura, Japan, in a manner reminiscent of the Shigaraki and Iga styles of natural wood-fired ceramics. 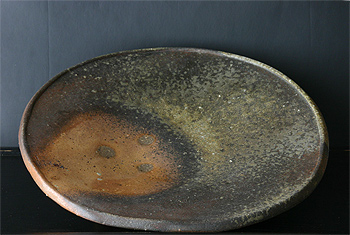 Wood-fired plate. Ben Cohen. 1990s. D:12 inches (31.5 cm). Cohen was a talented and inventive American potter working in the Japanese ceramic village of Echizen. After years of experimentation, he developed his own style, using local materials. His impressive efforts earned him quite a following. He died at an early age from ALS, Lou Gehrig's disease. His wife, Reiko, carries on his work (see next piece). 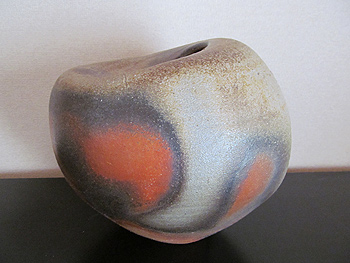 Wood-fired vase. Reiko Cohen. Late 1990s. H: 9 inches (23 cm). When husband Ben found himself growing weaker from his illness, he passed on his ceramic secrets to wife Reiko, who had been a craftswoman in her own right before their marriage. Her work bloomed. Building on Ben's unique firing techniques, Reiko carried on Ben's original shapes and developed her own. 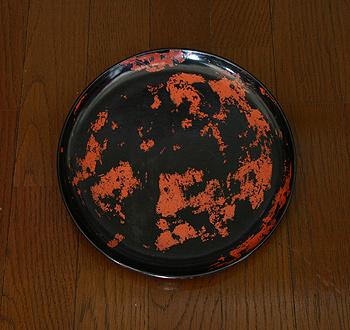 Negoro plate. Lacquerware. Late Muromachi period (16th century). D: 10 inches (26 cm). A piece of negoro ware starts life with a black undercoat covered by a final layer of red lacquer. After repeated use, the upper coat wears away gradually, exposing hints of the black undercoat for a subtle burnished effect. In this case, extreme use, perhaps over much of the piece's lengthy history, but with great care, wore away much of the red coating, leaving vast expanses of black and well-aged red with a pleasing patina. 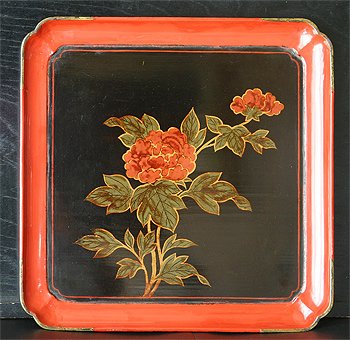 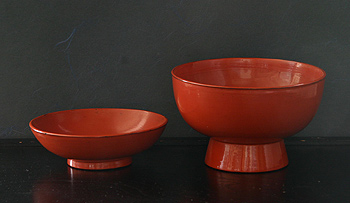 Negoro bowl with lid, from yotsuwan set. Late Edo period (19th century). H: 3 inches (8 cm) x D: 5 inches (13 cm). Part of a set of four pieces (yotsuwan), this is the rice bowl and lid, which are accompanied by a soup bowl and lid (not shown). An excellent example of Late Edo negoro lacquerware, with just a hint of the under-black layer beginning to emerge, adding depth and intrigue around the rim of the bowl. 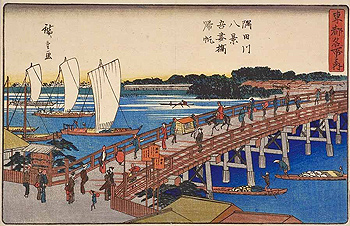 Boats Sailing at the Azuma-bashi, from the series "Eight Views of the Sumida in Edo." Hiroshige I (1797-1858). Woodblock print (ukiyo-e). Ink and color on paper. 8 x 13 inches (20 x 34.6 cm). The river Sumida, which runs through central Tokyo (then called Edo), made for a popular and colorful backdrop for ukiyo-e in the early days of the Japanese capital. The massive wooden expanse of the Azuma Bridge can be seen in all its glory. 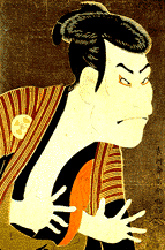 Actor print. Sharaku (flourished 1794-95). Woodblock print (ukiyo-e). Ink and color on paper. 1794. Approx. 9 x 14 inches (24.4 x 36.2 cm). Sharaku is the mystery man of the ukiyo-e world. After leaving an impressive body of work in a short time, he disappeared and to this day his true identity remains unknown. In this print, the artist catches Kabuki actor Otani Oniji, playing the servant Edohei, in mid-pose, creating dynamic movement and drama within a limited framework. 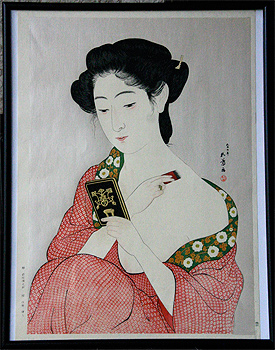 Make Up. Goyo Hashiguchi (1881-1921). Color woodcut print (shin-hanga). 1918. Son of a samurai-painter father, Hashiguchi began his career by doing illustrations for the books of some famous Japanese authors, including Natsume Soseki and Jun'ichiro Tanizaki. In this work, a classic Japanese beauty in a kimono applies the white powder still in use at the time. The artist is best known for his shin-hanga, new-style prints, of which this is a prime example.

(Left) Calligraphy. Otagaki Rengetsu (1794-1875). Ink on paper. Paper size: 2.5 x 14 inches (6 x 37 cm). Elegant, flowing calligraphy penned by Japanese Buddhist nun Rengetsu, who was a poet, painter, and potter. Written on a strip of decorative paper for poetry (tanzaku), her waka poem reads: "Like white clouds floating / and ever-shifting all the time / our mind is changing / and no one knows / why that is."

(Right) Calligraphy. Otagaki Rengetsu. Ink on paper. Paper size: 2.5 x 14 inches (6 x 37 cm). A second poem by Zen nun Rengetsu. This one reads, "Plovers sing / on the bank of the Kamogawa river / by moonlight, / where midnight cold lets settle on my sleeve / the year's first frost." 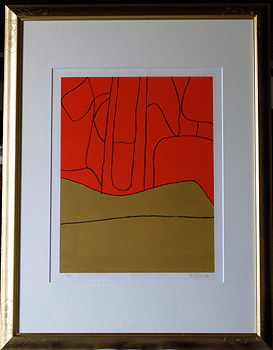 Untitled work. Shosuke Osawa (1903-97). Lithograph. 14 x 18 inches (34.7 x 44.5 cm). An underappreciated abstract painter who worked in a variety of styles, Osawa nonetheless made a living at his art, shifting from representational paintings to abstracts in the 1980s. 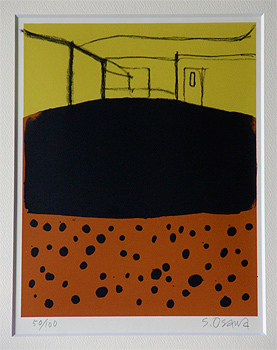 Untitled work. Shosuke Osawa. Lithograph. 8 x 11 inches (21.3 x 27 cm). This second composition hints at the artist's range of expression. His work drew attention from abroad, and he exhibited at the famed Paris show, Salon de Mai, among one. Like Goyo Hashiguchi, Osawa was also commissioned to illustrate book jackets, including Yukio Mishima's The Sailor who Fell from Grace with the Sea. 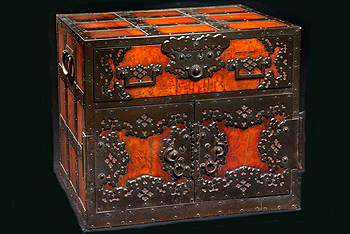 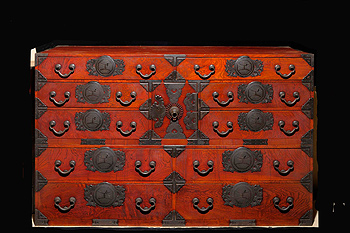 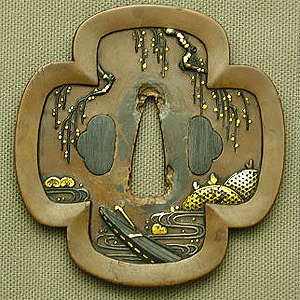 Sword guard. Made by Kyo Shoami, no signature. Copper, gold inlay. Late Edo period (18th century). Approx. 3 x 3 inches (7 x 7 cm). This ornate sword guard (tsuba) is decorated with overhanging willows above, and a flowing stream below. The bow of a boat graces the foreground, with mountains in the distance. The other side features leaves floating on a river. 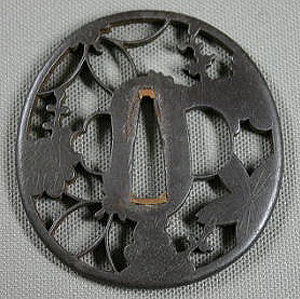 Sword guard. Made by Kamiyoshi Fukanobu. Late Edo period (18th century). Iron, gold inlay. A much more typical sword guard (tsuba) than the copper specimen from Kyo Shoami, this one features openwork, some of it in the shape of a gourd, a popular Japanese theme. Light touches of gold add a splash of color.

Note: Kudos to Sarah Knight of Simon & Schuster for suggesting Brodie's wares be displayed here. New pieces will be added with each new book. I also want to thank Shigeyoshi Suzuki and Paul Martin for their help in preparing this page, as well as Mr. Sugita of Token Sugita for allowing the use of the photographs of sword guards.