NOTE: In Japan, the line between "art" and "craft" is blurred. Much good art can be found among handcrafted items, which are created as functional art. 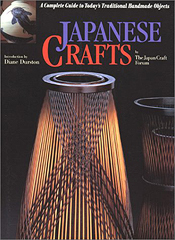 The array of traditional Japanese crafts is at times overwhelming. Among others, you can still find quality ceramics, textiles, lacquer ware, bamboo works, handmade paper, metalwork, and woodcraft. This volume introduces over ninety traditional crafts, in the old days produced in one central location, with color photographs and detailed text.

In addition, the book contains a color-coded map of Japan showing traditional craft districts throughout the country; a compilation of regional craft museums, showrooms, and craft centers; a roster of craft associations; an annotated reading list; and two bilingual craft indexes.

Due to the vast scope of this project, the text falters in places, but this book was a labor of love for a number of people. I should know. I was one of them. Currently out of print, the volume is worth keeping an eye out for. Originally published in hard cover as the Japan Craft Sourcebook.

Uncommon Clay: The Life and Pottery of Rosanjin by Sidney B. Cardozo and Masaaki Hirano. Translated by Juliet Winters Carpenter. 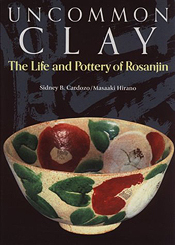 A free spirit in a country where outspoken individuals are considered a rarity (at least to this extent), Rosanjin is still revered today for two things: first, his verve and very un-Japanese-like ways and, second, his work in ceramics, calligraphy, design, and Japanese cuisine. Whether his robust independence or his output is more important depends on to whom you listen.

That said, some of his work also elicits controversy, mostly over his methodology. He picked the brains of some of the finer artist-potters of his generation, and often could be found making pieces in their workshop, using their glazes and clay mixes, and firing in their kilns. Yet his distinctive approach is instantly recognizable.

No matter what you may ultimately come to think of method or man, there are treasures to be found in this volume, not the least of which is Rosanjin's commentary on art, life, dining, and more, dutifully taken down by his secretary and future biographer Masaaki Hirano.

The late Sidney B. Cardozo, an American who arrived in Japan soon after the end of World War II, was an art lover with a keen eye for Japanese work and soon happened upon Rosanjin's ceramic pieces, which, like the best of Japanese ceramic ware, was art for the table, for flower arrangements, and for decorating the alcove (tokonoma) in the traditional Japanese room. As the first Westerner to discover Rosanjin, Cardozo was instrumental in the artist's only tour of the United States in 1954. Beautifully translated by Juliet Winters Carpenter.

Originally published in hard cover under the title of The Art of Kitaoji Rosanjin, this book is, sadly, now out-of-print but lives on at online bookstores around the world.

DISCLAIMER: I lent a hand in the publication of this book.

Negoro, various contributors. Published in conjunction with an exhibition at the Okura Museum of Art. Text in Japanese and English. 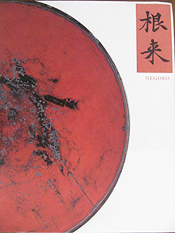 Negoro is a style of Japanese lacquerware, usually red with distinguishing black highlights, and easily my favorite in the genre. Good books on lacquerware, let alone negoro, are hard to find in English.

Published at the time of an impressive exhibition, this equally stirring museum catalogue contains nearly two hundred prime examples of negoro, mostly from the classic Muromachi period (1336-1573). All pieces are shown in full color, and text by various contributors comes with English translations. Additional pieces not exhibited in the show appear in these pages.

A Herculean effort on all fronts, this is a pricy but worthwhile publication for lacquerware aficionados. At the time of this writing the book was still available from the museum by mail order or at the venue. 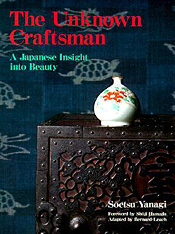 The text was massaged into existence with great care by renowned British potter Bernard Leach, who, the story goes, took five years to convey the essence of mingei in English to his satisfaction. This classic collection of essays defines the spirit of mingei as set down by essayist and connoisseur Yanagi and his cohorts (including potters Hamada and Leach). Yanagi also founded the Japan Folk Crafts Museum in Tokyo, otherwise known as the Mingei-kan.

One of many sensibilities of the Japanese art world, mingei has spread around the world. The term "mingei" encompasses the idea of anonymous craftsmen and -women who fashion works of beauty after years of making the same shapes over and over until producing them becomes a nearly unconscious activity. That automatic, unthinking making of an everyday object releases, according to Yanagi, a gentle, uninhibited freedom of expression.

Today, the idea of mingei has drawn controversy for a number of reasons. That is a discussion for another time and place, but let me just repeat that mingei is only one of many aesthetics from Japan and far from an end-all. Not an easy read at times, Yanagi's essays will nonetheless reward the effort. First published in 1972.

DISCLAIMER: I began working for the publisher of this volume some twelve years after its publication, but was involved in one of the paperback reprint editions.