You Gotta Have Wa by Robert Whiting. 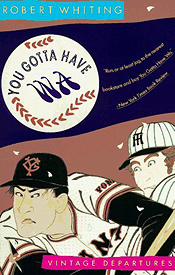 Considered a seminal book on Japan by many, Whiting does for Japanese baseball and society what Michael Lewis does for American sports and finances. You don't have to be a die-hard sports fan to enjoy this outing and the insights it provides on the Japanese Way. Written a number of years ago, it is still incisive and illuminating. Look for the 2009 edition. Whiting is also the author of Tokyo Underworld: The Fast Times and Hard Life of an American Gangster in Japan.

Dogs and Demons by Alex Kerr. 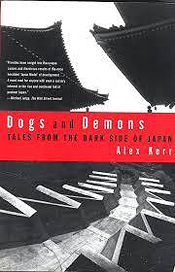 For muckrakers, conspiracy theorists, and anyone who has scratched his or her head over some of the more inexplicable moves of the Japanese powers-that-be, this is the book for you. A long-time Japan resident, Kerr's effort is a well-researched, well-written peek behind the facade—sure to be an eye-opener for even the most jaded expat. Don't let any of the unfortunate subtitles (they vary with the edition) put you off. In Lost Japan, Kerr's previous work, he goes in the opposite direction, offering a poetic homage to most things traditional in his adopted country. 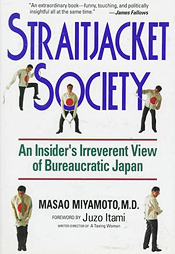 This book is a case of something simple morphing into the profound. After a distinguished career in the United States, Dr. Miyamoto took an exalted post back in Japan in the health and welfare ministry. He rose steadily through the ranks, but slowly began to feel the pressure of the stifling bureaucratic life, which he summed up in capsule form as, "Don't take vacations, don't be late, and don't initiate anything new."

When first published in Japanese, Miyamoto's book created a sensation. He was one of the first, if not the first, of the country's privileged bureaucrats to speak out on the oppressive and manipulative practices of the country's de facto leaders, and for that he suffered greatly, especially after the success of this book. His revelations are sometimes astounding and at other times illuminate what seem such childlike practices—unless the reader is Japanese, or has come in contact with any Japanese institution for a length of time. Then it all begins to make sense. The stuff of farce and nightmares.

Now out of print, and perhaps somewhat dated, this book is still worth seeking out. Film director Juzo Itami's foreword is a perfect fit for this volume, and demonstrates the director's brilliance in a different genre. Ably translated by Julie Carpenter.

DISCLAIMER: I was involved in the English-language version of this book and had the privilege of meeting both men, Miyamoto on a handful of occasions, Itami on one long, lingering afternoon in the back room of a coffee shop tucked away down a Tokyo back street.