In Praise of Shadows by Jun'ichiro Tanizaki. Translated by Thomas J. Harper and Edward G. Seidensticker. 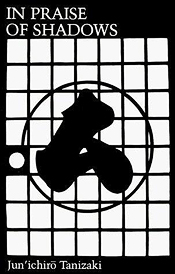 This short yet evocative essay—or perhaps better put, a collection of observations—on Japanese aesthetics by novelist Tanizaki (1886-1965) provides a wonderful introduction to the subject. Wandering, eccentric, loveable, observant, and full of small epiphanies—all of these and more are appropriate descriptions for the author's writings on the Japanese sense of beauty. Consider this short snippet:

As a general matter we find it hard to be really at home with things that shine and glitter. The Westerner uses silver and steel and nickel tableware, and polishes it to a fine brilliance, but ... we begin to enjoy it only when the luster has worn off, when it has begun to take on a dark, smoky patina.

Sensitively translated, with a fine afterword. Not the last word by any means, but one very much worth reading. 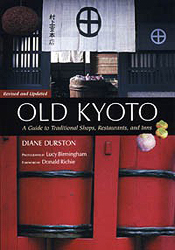 Many consider Kyoto the cradle of Japanese culture and crafts. While much of Japanese culture was created outside Kyoto, there can be no doubt that the "ancient capital" of Japan has much to offer even today. Diane Durston fell in love with Kyoto and lived there for sixteen years. She learned to navigate the demanding rituals and win the trust of the locals.

Even in her day, vast swatches of the traditional neighborhoods were falling to modernization. Durston struck upon the idea of introducing the city through its vintage craft shops, restaurants, and Japanese inns, where time-honored traditions have been lovingly nurtured for centuries—often by the tenth generation or higher. What emerges is a loving portrait of a city, its people, and its culture. Beautifully written and heartfelt.

Coupled with the enchanting opening pages, this book rises above the level of guide to that of travel literature, weaving an elegant tapestry of one of Japan's most beloved cities. Look for the revised edition, though either will suffice since the parts of Kyoto introduced in these pages have remained mostly unchanged for generations. Excellent black-and-white photography by Lucy Birmingham, now also a journalist and author, adds delicate visuals to complete this treasure of a book.

DISCLAIMER: The manuscript had been completed and the photography shot by the time I joined this publishing house. When the original editor departed, the project fell into my hands for completion. I had no complaints.

Memories of Silk and Straw: A Self-Portrait of Small-Town Japan by Dr. Junichi Saga. Translated by Garry O. Evans. 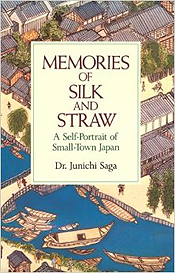 If famed folklorist Alan Lomax had been steeped in the traditional ways of Japan and possessed a subtle eye for the Japanese character, he might have penned this book. Instead, Dr. Saga, the proverbial beloved village doctor, all but channeled Lomax, recording the stories of his elderly patients as he saw their way of life disappearing. He gets them to open up to him, and the reader is rewarded with a series of personal recollections from a tatami-mat maker, the town midwife, a yakuza, the local fishing folks (husbands and wives), woodworkers, and more. The result is a moving portrayal of village life in provincial Japan—from the inside. Wonderfully translated by Garry O. Evans. Out of print but worth tracking down. 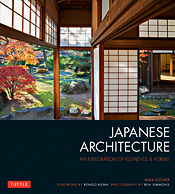 A lot more interesting than the subtitle might suggest, this book is an excellent introduction to traditional Japanese buildings and gardens, culling examples from temples, castles, tea rooms, homes, and more. A major benefit of this volume is its hundreds of photographs painstakingly shot by Ben Simmons (one of the first photographer-authors I worked with in Japan, and now a friend). Writer Mira Locher expertly delves into the architecture with a perspective that encompasses the traditional attitude and the modern eye. Nicely balanced and informative writing.

The book is divided roughly into thirds; the first third for introductory essays and discussions of material and techniques; the second, for buildings, with sections on decoration and ornamentation; and the third, for Japanese gardens, in all their variations. From start to finish, a thorough and rewarding work. Simmons paired up with writer Judith Clancy for Kyoto: City of Zen, and the late Donald Richie for Tokyo Megacity.