Crooked Cucumber: The Life and Teaching of Shunryu Suzuki by David Chadwick. 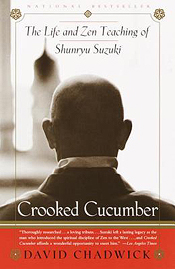 Not strictly a book on Japan (although the first 150 pages cover Suzuki's life there), this intriguing biography charts the rise of one thread of Japanese Zen Buddhism in the United States through the story of the "other Suzuki."

Shunryu Suzuki is known to countless readers as the author of the modern spiritual classic Zen Mind, Beginner's Mind. He began his studies in a rigid monastery in Japan, and realized his only chance to practice Zen as he believed it should be practiced was to flee to the United States. Eventually, he was sent by his order to establish a temple in San Francisco.

Modest, idiosyncratic, and determined, Suzuki comes vividly to life in this fully realized biography of a modern Zen master. Author David Chadwick fleshes out his intimate and engrossing narrative with Suzuki's own words and the memories of his students, friends, and family. Also interspersed with previously unpublished passages from Suzuki's talks, Crooked Cucumber evokes an inspired, down-to-earth life. Alongside Suzuki, the reader can find a way to "practice with mountains, trees, and stones and to find ourselves in this big world."

Masters of the Three Ways: Reflections of a Chinese Sage on Living a Satisfying Life by Hung Ying-ming. Translated and with an introduction by William Scott Wilson. Foreword by Bill Porter/Red Pine. 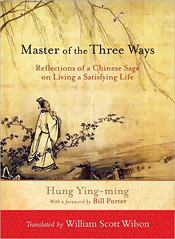 This gem is actually an old Chinese classic, but came to be appreciated in Japan long after it was all but lost in China. To this day, most of the major Japanese publishing companies have a translation of this book among their offerings of classics.

Author Hung Ying-ming must have been an extraordinary fellow, his fully rounded education rare even among the elite of his time, which was during the Ming Dynasty (1368-1644). Well versed in Taoism, Buddhism, and Confucianism, he penned a lifetime's worth of his deepest reflections in this volume. Through the lens of what was called the Three Creeds (in the title as the "Three Ways"), Hung explores man's better and lesser nature, the ways of the world at large, and how to live a full life in awareness and simplicity. It's hard to believe this perspective was given a complete treatment as early as the Ming period, but the proof is in these pages. A wonderful collection.

The book's life in English has been as tentative as its existence in its native China. Published as The Unencumbered Spirit: Reflections of a Chinese Sage (second edition) and much earlier as Roots of Wisdom (first edition, 1985), this third edition appeared from Shambhala Publications after Wilson found a new home for his books with the Boston-based publisher. In either of the last two editions, readers can find an entirely new introduction by Wilson. Hopefully, this latest reincarnation will do the trick.

DISCLAIMER: I was the editor for the second edition of this book.